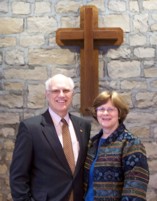 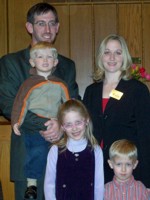 Congratulations to Rev. McCurdy as he was installed as Pastor of First Baptist Church in Painesville on Sunday, January 20, 2008.

The photo (right) is of Peter, his wife Sarah and their 3 children: Elisabeth, Nathaniel, and Samuel (whom Peter is holding).