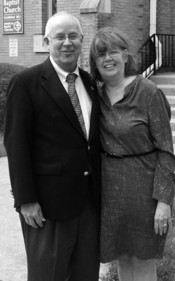 The Rev. Tim Chesser retires from First Baptist Church, Delaware on May 18, 2014. American Baptist Churches of Ohio wishes to thank Rev. Chesser for his service and wish him and his wife Kathy a wonderful retirement!
Tim served in churches in Indiana, Wisconsin, and Oklahoma before coming to First Baptist, Delaware in 2001. While in Delaware he performed sixteen weddings (including both his sons), thirty-two funerals, and ushered three people through ordinations (Karen Stoner, Robert Russell and Sam Chesser). He served on the Pastoral Relations Committee and Scholarship Committee of the Marion Association of American Baptist Churches, and has been active in the Delaware Ministerial Association.
He and Kathryn have two sons — Donald, who lives in Delaware, and Sam who lives in Norwich, Connecticut. The Chessers plan to remain in Delaware during retirement. Again, ABC Ohio wishes the Chesser family the best in retirement! May God's blessings fall abundantly for a true servant of God! 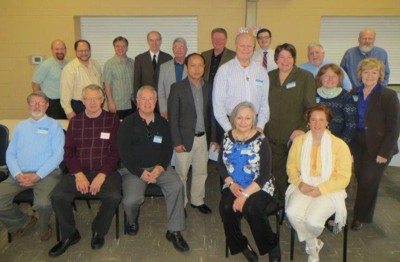 The Miami Baptist Association Ministers Council met April 8 at Mt. Washington Baptist Church for lunch and a presentation on End of Life Care by Rita McClure.  Rita is a graduate of the ABC/Ohio Leadership Academy and an experienced Bereavement Counselor.  She currently serves as Pastoral Intern at Dorothy Lane American Baptist Church in Kettering.
While we were together we celebrated the ministry of Dianne Steelman who is retiring after more than 25 years of service in our Association.  The Pastor of Linwood and Columbia Baptist Churches, Rev. Steelman along with her husband Jim received many warm  tributes from their ministry colleagues at the lunch.
The twenty ministers council participants who gathered for fellowship that day were blessed by a surprise visit from missionary, Rev. Kit Ripley!

Rev. G. Reed Taylor, 94 of Hickory Ct. Jefferson died Friday (Jan. 17th) at the Ashtabula County Medical Center. He was born June 6, 1919 in Clarksburg, West Virginia the son of Archie Campbell and Ava Alice (Bassford) Taylor. Rev. Taylor graduated from Alderson-Broaddus College in Philippi, WV and received his Masters Degree from West Virginia University in Morgantown, WV. He was a school administrator for Buckeye Local Schools in Ashtabula and was an ordained American Baptist Minister serving the Minister-At-Large Program for many years. During World War II he was an Army Officer in Field Artillery, as an observer on land and air, serving in Europe, receiving the Air Medal, three Oak Leaf Clusters and other citations. He was an active member of the First Baptist Church of Ashtabula, Ohio. Of course, his life was not really ended by his death, only changed. He made the great step from faith into vision. He found a life far more beautiful than the eye of man has ever seen, more beautiful than the ear of man has ever heard and more beautiful than the mind of man has ever imagined.

Ralph E. Carrico, 82, of Ironton, Ohio passed away Sunday, July 21, 2013 at Our Lady of Bellefonte Hospital. Ralph was a deacon and active member of First Baptist Church, Ironton. Ralph not only served in his local church, but he also gave of his time and wisdom to ABC/Ohio where he served in a number of capacities throughout the years. He also served as a member of the Region's Baptist Foundation Trustee Committee.  He prayed for the Region's ministry and expressed appreciation for ABC/Ohio. He is survived by his wife Phyllis also served as President of our board and in many other capacities. Ralph and Phyllis were married in 1951 and were celebrating 62 years of marriage. Our prayers go out to the Carrico family as we thank them for so many years of serving God!

The Toledo Area American Baptist Association (TAABA) was blessed to have favorable weather for the TAABA Annual Picnic bringing together churches from across Northwest Ohio. TAABA was blessed to welcome Rev. Jane Gibbons. Enjoy a video of the day's events!